The state of fieldset interoperability

As part of my work at Bocoup, I recently started working with browser implementers to improve the state of fieldset, the 21 year old feature in HTML, that provides form accessibility benefits to assistive technologies like screen readers. It suffers from a number of interoperability bugs that make it difficult for web developers to use.

Here is an example form grouped with a <legend> caption in a <fieldset> element:

And the corresponding markup for the above example.

The element is defined in the HTML standard, along with rendering rules in the Rendering section. Further developer documentation is available on MDN.

Based on a query of the HTTP Archive data set, containing the raw content of the top 1.3 million web pages, we find the relative usage of each HTML element. The fieldset element is used on 8.41% of the web pages, which is higher than other popular features, such as the video and canvas elements; however, the legend element is used on 2.46% of web pages, which is not ideal for assistive technologies. Meanwhile, the form element appears on 70.55% of pages, and we believe that if interoperability bugs were fixed, correct and semantic fieldset and legend use would increase, and have a positive impact on form accessibility for the web.

In January 1997, HTML 3.2 introduces forms and some form controls, but does not include the fieldset or legend elements.

In July 1997, the first draft of HTML 4.0 introduces the fieldset and legend elements:

The FIELDSET element allows form designers to group thematically related controls together. Grouping controls makes it easier for users to understand their purpose while simultaneously facilitating tabbing navigation for visual user agents and speech navigation for speech-oriented user agents. The proper use of this element makes documents more accessible to people with disabilities.

In December 1999, HTML 4.01 is published as a W3C Recommendation, without changing the definitions of the fieldset and legend elements.

In December 2003, Ian Hickson extends the fieldset element with the disabled and form attributes in the Proposed XHTML Module: XForms Basic, later renamed to Web Forms 2.0.

In September 2008, Ian Hickson adds the fieldset element to the HTML standard.

In February 2009, Ian Hickson specifies rendering rules for the fieldset element. The specification has since gone through some minor revisions, e.g., specifying that fieldset establishes a block formatting context in 2009 and adding min-width: min-content; in 2014.

In August 2018, I proposed a number of changes to the standard to better define how it should work, and resolve ambiguity between browser implementer interpretations.

As part of our work at Bocoup to improve the interoperability of the fieldset and legend child element, we talked to web developers and browser implementers, proposed changes to the standard, and wrote a lot of tests. At the time of this writing, 26 issues have been reported on the HTML specification for the fieldset element, and the tests that we wrote show a clear lack of interoperability among browser engines. 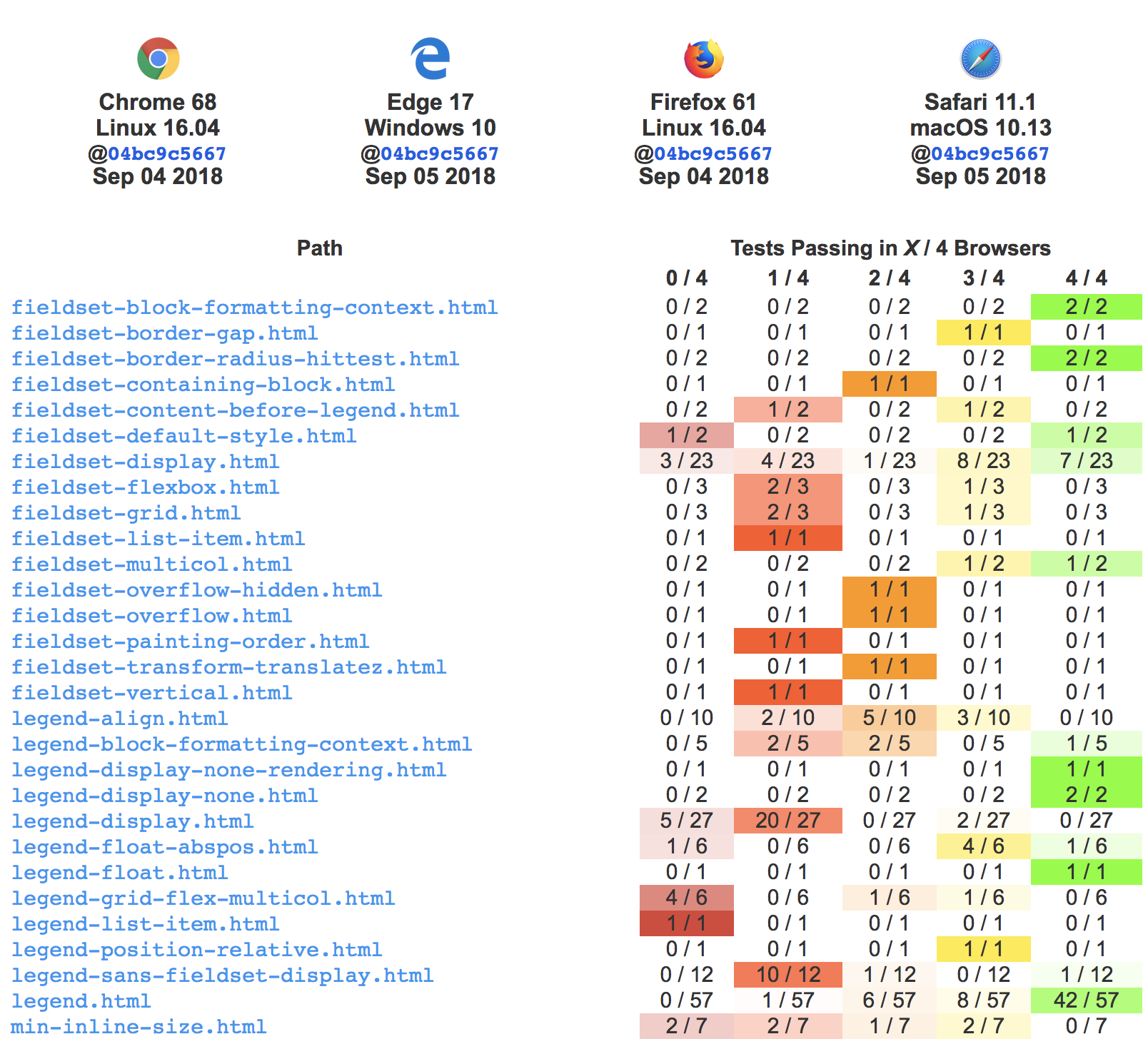 Of the 26 issues filed against the specification, 17 are about rendering interoperability. These rendering issues affect use cases such as making a fieldset scrollable, which currently result in broken scroll-rendering in some browsers. These issues also affect consistent legend rendering which is causing web developers avoid using the fieldset element altogether. Since the fieldset element is intended to help people who use assistive technologies to navigate forms, the current situation is less than ideal.

In April of this year, Mozilla developers filed a meta-issue on the HTML specification “Need to spec fieldset layout” to address the ambiguities which have been leading to interoperability issues between browser implementations. During the past few weeks of work on fieldset, we made initial proposed changes to the rendering section of the HTML standard to address these 17 issues. At the time of this writing, these changes are under review.

Web developers also struggle with changing the default behaviors of fieldset and legend and seek ways to turn off the “magic” to have the elements render as normal elements. To address this, we created a proposal to extend the -webkit-appearance CSS property with a new value called fieldset and a new property called legend that are together capable giving grouped rendering behavior to regular elements, as well as resetting fieldset/legend elements to behave like normal elements.

The general purpose proposed specification for an "unprefixed" CSS ‘appearance’ property, has been blocked by Mozilla's statement that it is not web-compatible as currently defined, meaning that implementing appearance would break the existing behavior of websites that are currently using CSS appearance in a different way.

We asked the W3C CSS working group for feedback on the above approach, and they had some reservations and will develop an alternative proposal. When there is consensus for how it should work, we will update the specification and tests accordingly.

We had also considered defining new display values for fieldset and legend, but care needs to be taken to preserve web compatibility. There are thousands of pages in HTTP Archive that set ‘display’ to something on fieldset or legend, but browsers typically behave as display: block was set. For example, specifying display: inline on the legend needs to render the same as it does by default.

In parallel, we authored an initial specification for the ‘-webkit-appearance’ property in Mike Taylor's WHATWG Compatibility standard (which reverse engineers web platform wonk into status quo specifications), along with accompanying tests. More work needs to be done for the ‘-webkit-appearance’ (or unprefixed ‘appearance’) to define what the values mean and to reach interoperability on the supported values.

We have started looking into testing accessibility explicitly, to ensure that the elements remain accessible even when they are styled in particular ways.

This work has uncovered ambiguities in the specification, which we have submitted a proposal to address. We have also identified interoperability issues in the accessiblity mapping in implementations, which we have reported.

Meta bugs have been reported for each browser engine (Gecko, Chromium, WebKit, EdgeHTML), which depend on more specific bugs.

As of September 18 2018, the following issues have been fixed in Gecko:

In Gecko, the bug Implement fieldset/legend in terms of '-webkit-appearance' currently has a work-in-progress patch.

The following issues have been fixes in Chromium:

The WebKit and Edge teams are aware of bugs, and we will follow up with them to track progress.

The fieldset and legend elements are useful to group related form controls, in particular to aid people who use assistive technologies. They are currently not interoperable and are difficult for web developers to style. With our work and proposal, we aim to resolve the problems so that they can be used without restrictions and behave the same in all browser engines, which will benefit browser implementers, web developers, and end users.

One Response to “The state of fieldset interoperability”